What is a Portuguese Man o’ War? 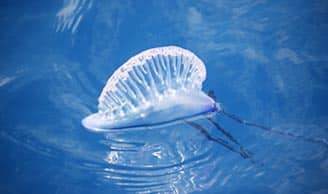 In fact during our whale watching tours in Tenerife we have the opportunity to observe an incredible amount of wild life, whales, dolphins , sea birds, including the beautiful Portuguese Man o’War.

The Man o’ War (Physalia physalis) also known as a Bluebottle, is often called a jellyfish, but is actually a species of siphonophore, a colony of organisms, polyp, called zooids working together as one.

The man-of-war is composed with four separate parts-polyps specialized in different functions:

The pneumatophore, or bladder. Resembling an 18th-century Portuguese warship with a big sail, the Man o’ War is easily recognized by its balloon-like float, which may be blue, violet, or pink and rises up to six inches above the waterline.

Lurking below the float are long strands of tentacles that grow to an average of 10 meters and may extend by as much as 30 meters. The tentacles contain stinging called nematocysts, microscopic capsules loaded with coiled, barbed tubes that deliver venom capable of paralyzing and killing the prey. They are carnivores and some of their common preys are small fish, fish larvae, squid, shrimp, and more. However, fish make up the vast majority of their diet. The muscles in the tentacles draw prey up to a polyp containing the gastro zooids or digestive organisms.

The result then, is that each larvae will go through asexual budding to produce a new Man-of-War colony.

They can be found in tropical and subtropical waters floating in groups of more than 1,000. They can not propulsion themselves, they can either drift on the currents or catch the wind with their pneumatophores (their sail). To avoid threats on the surface, they can deflate their air bags and briefly submerge.  One of their main predators are sea turtles.

To avoid being stung, never touch these animals with bare skin and DO NOT ENTER THE WATER IF THEY ARE PRESENT. For humans the sting is very painful and can cause serious effects, including fever, shock, and interference with heart and lung action.

Also take care if you see them washed on the beach, because the tentacles can sting even if the colony is dead.

We are a small group of Marine Biologists, Naturalists and Photographers living in Tenerife. When we don't have whale and dolphin watching tours you will find us out on the boat, exploring all the amazing marine wildlife of Costa Adeje, Tenerife. We love what we do, we support research and conservation projects and we hope you will join us.
Reservar
Book

You can find out more about which cookies we are using or switch them off in settings.

This website uses cookies so that we can provide you with the best user experience possible. Cookie information is stored in your browser and performs functions such as recognising you when you return to our website and helping our team to understand which sections of the website you find most interesting and useful.

Strictly Necessary Cookie should be enabled at all times so that we can save your preferences for cookie settings.

If you disable this cookie, we will not be able to save your preferences. This means that every time you visit this website you will need to enable or disable cookies again.

This website uses Google Analytics to collect anonymous information such as the number of visitors to the site, and the most popular pages.

Please enable Strictly Necessary Cookies first so that we can save your preferences!